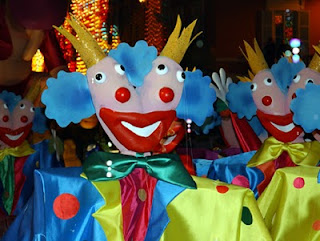 The 127th Carnaval de Nice [Nice Carnival] will take place from February 18 to March 8, 2011, with the theme of Le Roi de la Méditerranée [The King of the Mediterranean]. The opening festivities begin on Friday night at 8:30 pm, when King Carnival arrives at Place Masséna to take the keys to the city, announcing his brief reign. From then on, extravagance knows no bounds, and originality and exuberance are what’s expected!


The Corso Carnavalesque [Carnival Procession] consists of 20 floats based on the carnival theme, 30 or so giant papier-mâché puppets (known as grosses têtes or ‘big heads’) and 200 entertainers who circle around the floats. It turns into a motley, brightly colored parade that blends in street artists and music groups from around the world.
As tradition has it, on the last night, King Carnival parades alone, before being burned at the stake, either on the sea or on the shore. A firework display to music then takes place over the Baie des Anges and the castle mount comes ablaze as if in response.
The Bataille de Fleurs [Battle of Flower] shows off the quality and huge variety of flowers on the Côte d’Azur, with 85% of the flowers used being produced locally. The floats completely covered in flowers, parade along the Promenade des Anglais between the Avenue des Phocéens and the Hôtel Négresco.
On each float, costumed dolls throw 100,000 flowers to enthusiastic crowds: gladioli, chrysanthemums, mimosas, gerberas, marguerites, roses, carnations, and more.
The event, the only one of its kind in the world, is one of the Côte d’Azur’s best-known festivals. Nice exports its expertise in the elegance, beauty and charm of battles of flowers all over the world.
Carnival is accompanied by traditional events like the Bain de Carnaval [Carnival Bath], Carnasocca (tasting of the traditional Nice dish, socca), the Bal des Enfants [Children’s Ball] and the Corso Illuminé [Moonlit Parade].

For the full program, visit the Carnaval de Nice website.
For information on great hotel packages & tours in the French Riviera click here.