Are you connected to the tourism/travel/hospitality industries or travel media in any way? If so, please specify how (kindly include any relevant company names/Web sites!).
www.perutouristinformation.com
www.toursgalapagosisland.com
whatsapp: +0051 - 982290111

On which destinations & travel topics can you advise members especially well?
Peru, Mexico, Brasil, Bolivia, Ecuador ( Galapagos Island Overnight on Board or Hotel based ) & Mexico ( The Mayan Route )

What destinations are you most interested in learning about?
Germany, Italy, French & Argentina

INTI RAYMI CUSCO JUNE 24TH
During the Inca Empire, the Inti Raymi was the most important of four ceremonies celebrated in Cusco, as related by Inca Garcilaso de la Vega. The celebration took place in the Haukaypata or the main plaza in the city.
The Inti Raymi ( " Festival of the Sun " ) was a religious ceremony of the Inca Empire in honor of the god Inti, one of the most venerated gods in Inca Religion . It really was the celebration of the Winter Solstice - the shortest day of the year in terms of the time between sunrise and sunset. In Peru, which falls below the equator, the months of June & July are Winter months.
According to chronicler Garcilaso de la Vega, Sapa Inca Pachacuti created the Inti Raymi to celebrate the new year in the Andes of the Southern Hemisphere. Since 1944, a theatrical representation of the Inti Raymi has been taking place at Sacsayhuaman ( two km. from Cusco ) on June 24 of each year, attracting thousands of tourist and local visitors. The ceremony was also said to indicate the mythical origin of the Incas. It lasted for nine days and was filled with colorful dances and processions, as well as animal sacrifices to ensure a good cropping season. The last Inti Raymi with the Inca Emperor's presence was carried out in 1535, after which the Spanish conquest and the Catholic Church share it. In 1944, a historical reconstruction of the Inti Raymi was directed by Faustino Espinoza Navarro and indigenous actors. The first reconstruction was largely based on the chronicles of Garcilaso de la Vega and only referred to the religious ceremony.
Inti Raymi is still celebrated in indigenous cultures throughout the Andes. Celebrations involve music, colorful costumes (most notable the woven aya huma mask) and the sharing of food. In many parts of the Andes, this celebration has been connected to the festivals of Saint John the Baptist, which falls on the day after the northern solstice
Axel Tippe
WWW.PERUTOURISTINFORMATION.COM
WWW.FACEBOOK.COM/PERUTOURISTINFORMATION
WWW.ECUADORTOURISTINFORMATION.COM
WWW.AXELTOURS.COM https://twitter.com/perutouristin
pe.linkedin.com/in/perutouristinformation
http://www.touristlink.com/user/peru-information.html
Skype. Machupicchu10

Machupicchu by Car and Return by Train

Daily departure to Machupicchu by Car

the journey out will be 07:30 am in the main square of your hotel. We continue the journey along a winding ascent toward the Abra Malaga and the snowy veronica is located at an altitude of 4,316 meters where we can enjoy the magnificent landscapes of the Cusco geography. After a…

01 Dia: International arrival in Lima
Assistance on your arrival in Lima and transfer to your selected hotel. Free time to rest and prepare for starting your trip around this unusual city and magical country.
Meals Included: None

INTI RAYMI CUSCO JUNE 24TH
During the Inca Empire, the Inti Raymi was the most important of four ceremonies celebrated in Cusco, as related by Inca Garcilaso de la Vega. The celebration took place in the Haukaypata or the main plaza in the city.
The Inti Raymi ( " Festival of the Sun " ) was a religious ceremony of the Inca Empire in honor of the god Inti, one of the most venerated gods in Inca Religion . It really was the celebration of the Winter Solstice - the shortest… 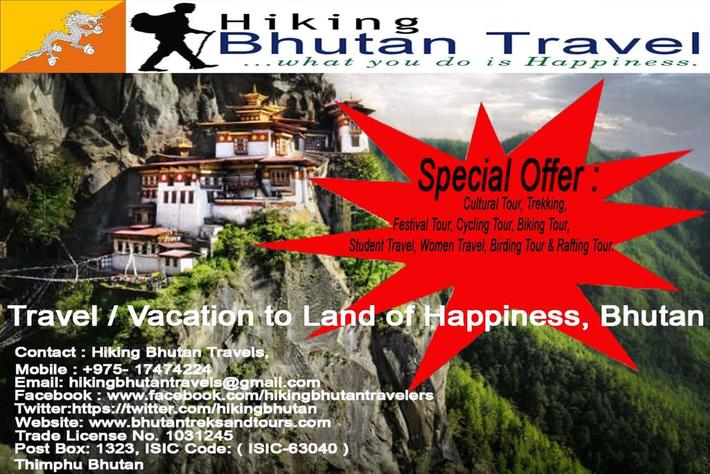 Deep in the Himalayas, on the border between China and India, located the Kingdom of Bhutan, which has pledged to remain carbon neutral for all time. Bhutan is a landlocked country in South Asia with a land area of approximately 300km long and 150km wide with an area of 38,394 square kilometers. Bhutan is comparable to Switzerland both in its size. The Altitude ranges from 160meters in the southern foothills to 7541 meters high in the northern high mountains. Around 70 % of area is covered by forest. The Bhutan forest has provided habitat to more than fifty-five hundred varieties of plant life and several rare and endangered species. Bhutan is Gross National Happiness country in the world. Bhutan considers Gross National Happiness is more important than Gross National Product. It is Buddhism country with a population of 700,000.

thanks for adding me and would be great to render our services and at the same time avail your services too since we are in the same line of profession. Looking forward for friendship and promote tourism in both the countries.

I'll try and get you some info re 'Tippe' in Vancouver.
We have an online application form... no cost for any of our services when you offer direct booking savings or special offers to our members.
Go to 'add your site' at top right corner of our front page at www.TheTopTravelClub.com   we will create your listed links and ask for your approval.

Tony Humphrey said…
Good to be connected with you Axel.... we have a country and western singer in Vancouver with the name Tippe...any relation.....also have you considered adding your tours to www.TheTopTravelClub.com  ?  cheers, tony

Axel, welcome to Tripatini, the worldwide travel community the New York Post dubbed “Facebook for travelers.” On Tripatini, you can mingle with travelers and top travel experts alike, so everybody learns how to travel better and smarter. A few tips to get you rolling:

• JOIN one or more of our 425+ discussion groups, covering most destinations, travel topics, and travel-related professions such as media, publicists, agents, and tour operators. What are you into? Chances are we cover it. If we don’t, create your own group!

• PROMOTE YOURSELF and/or your company by sharing your story, links, photos, videos, anything at all on the Text Box on your profile page. ESPECIALLY IF YOU'RE TRAVEL/HOSPITALITY-AFFILIATED AND HAVE NOT ALREADY DONE SO, DON'T FORGET TO MENTION YOUR COMPANY NAME!

• INVITE your friends, family, colleagues, readers, anyone and everyone interested in travel! More members means a more productive, useful, and fun experience for everyone.

Thanks again for joining us. C U online!