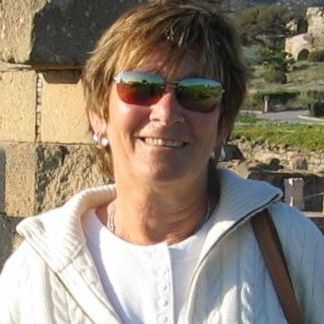 Are you connected to the tourism/travel/hospitality industries or travel media in any way? If so, please specify how (kindly include any relevant company names/Web sites!).
not really. I write books which are mostly set in Spain

On which destinations & travel topics can you advise members especially well?
Malaga

What destinations are you most interested in learning about?
anywhere in Spain

Living and writing in Spain

Joan lives in the south of Spain, where she writes novels aimed at the women’s commercial fiction market: “Spanish Lavender”, “Loving Harry”, "Santiago Tales", "The Only Blue Door", “The House on the Beach” and "The Shining City". A natural storyteller, her novels, almost invariably, centre on a strong female character and explore the emotions and relationships of her protagonist. Some of her books are set in periods of recent history, such as the Spanish Civil War and are meticulously researched.  Most have been set wholly or in part in Spain.

Joan has also written “Daughters of Spain”, a non-fiction book based on authentic interviews with a number of Spanish women of all ages and from all walks of life; this was published in 2009.

Joan, welcome to Tripatini, the Web's smartest travel/food community and blog! On Tripatini, you can mingle with travelers and top travel experts alike, so everybody learns how to travel better and smarter. A few tips to get you rolling:

Thanks for joining us – and C.U. online!

From today for five days my latest novel SANTIAGO TALES is available FREE on kindle.  Why don't all you ebook lovers download a copy and enjoy following Beth as she walks the Camino de Santiago.  Beth has come to believe that her life is no longer worth living so she sets off to travel 800 kilometres in all weathers, looking for a solution to her problems.  On the way she meets many interesting characters and makes new friends, each one seeking their own solutions.  A modern-day take…