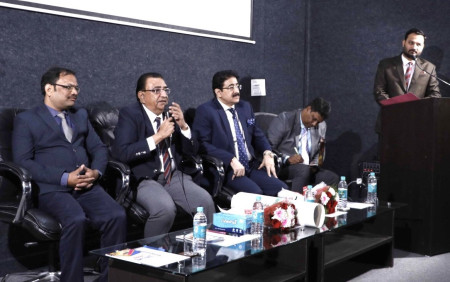 Raipur: “The most sacred places on earth are Jerusalem for Christianity, Mecca Medina for Islam, Triputi Balaji for Hindus, Golden Temple for Sikhism and Raipur is gong to be the most spiritual place for film makers of the World in no time,” said Ashok Tyagi a well known film maker fro Mumbai at Raipur.

“We are here to support each and every student of AAFT University to fulfill his or her desire to be in films, television and media. Learn well and there is no looking back. We have one man industry Dr. Marwah as our patron to support for every thing,” added Ashok Tyagi.

A master class was planned by the University for Ashok Tyagi to share first hand experiences of his forty year involvement in Indian Film Industry.

Ashok Tyagi also proposed to have a film festival at Raipur soon in association with Marwah Studios and International Chamber of Media and Entertainment Industry.