Frenchman, Yves du Parc, Vice President and General Manager of Beijing Sideways, parked his motorcycle on the street and showed up on time (no traffic jams for the motor bike) to meet me at my hotel.

He sized my helmet and adjusted my lap belt in the side car of his “Chang Jiang,” literally "The long River" motor bike, took my photo, and hopped onto his seat. Then, he turned the ignition key, and we were off. 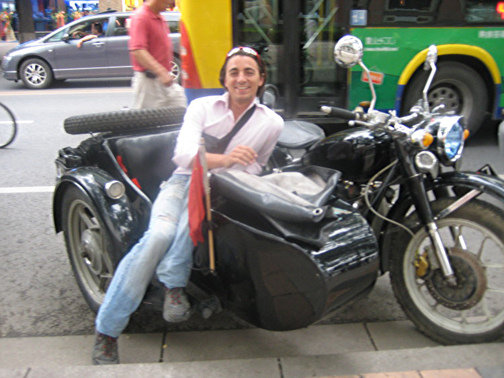 I had traveled through Beijing many times before, mostly in the back seat of a taxi, but this was my first motorcycle experience ever! I was thrilled to feel the wind on my face, as we zipped through Beijing's new Central Business District or “CBD” and I got up close to the phenomenal new skyscrapers. I snapped photos of The Park Hyatt tower, the Jianwai Soho Center, and the copper-colored Reignwood Building connected to the Fairmont Hotel by its distinctive “Sky Bridge.” I marveled at the Prospect Center one of Beijing’s new “green” buildings and The Place retail complex with its 820 ft long by 98 ft wide LED “Skyscreen” that is suspended from six stories (80 feet). We whisked past the CWTC and the CWTC3: the China World Trade Center, the tallest building in China, and I was blown away by Reem Koolhaas’ CCTV building (right), a non-traditional arch-like tower with the nick name “Boxer Shorts.”

I shot blurry, moving photographs of the SOHO Guanghua, intriguing with its white panels sloping at various angles and circular windows sitting next to other colorful circular panels, all enhanced by street level semi-circular entrances and doorways. Speaking loudly over the street noise, Yves explained how SOHO stands for “Small Office Home Office,” and Guanghua Lu is the area’s major east-west thoroughfare.

Our tour continued past the Ancient Ming Dynasty Observatory (circa 1442), now called the Ancient Astronomical Instruments Display Hall, situated at the southeast corner of Beijing's Jianguomen Bridge and on to the hutong alleyways of the ChongWenMen district, named for the gate that was once part of Beijing's city wall but was torn down in the 1960’s to make room for the Second Ring Road. 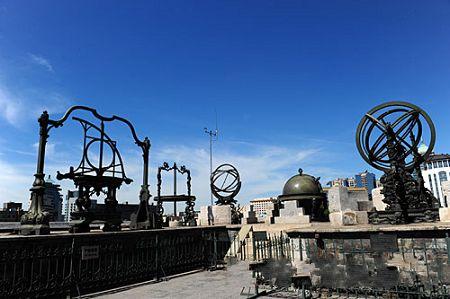 We drove through the Gulou hutongs in the area of the Drum and Bell towers -- two of the oldest monuments in Beijing, as well as the most famous hutong, NanluoGuzinag, but we also explored GeiluoGuxiang, Fangijia hutong, and Dongsi liutiao. We slowly motored through a food market hidden in a typical old hutong on Liuxie Street, a few hundred yards south of Tiananmen Square. Taking the motorcycle through the hutongs was truly a highlight. We got up close enough to actually watch old men playing Mahjong or checkers; kids tossing balls, eating ice cream from street vendors, or riding around in toy tractors; and old men and women just walking around in their pajamas, as they view the streets as their yard. 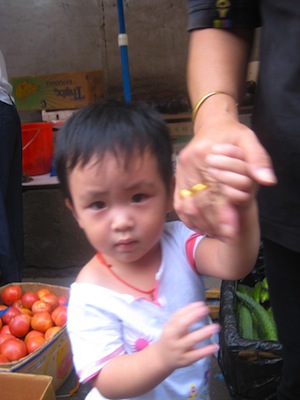 In fact, the streets were so narrow that we got stuck behind a small van (which wasn’t supposed to be there) that could not turn one of the street corners. Yves got off the motorcycle to help hand turn the van with some of the residents. This actually turned out to be a great way to meet the locals. 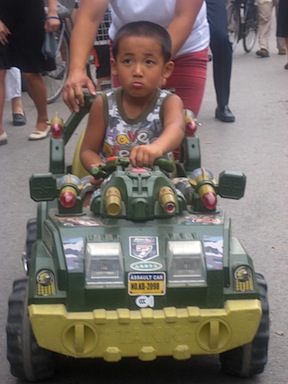 Following the hutongs, we drove to a Pearl Market called Hongqiao. We parked the motor bike and hopped off. Inside, we meandered our way through the stalls with vendors shouting to me in broken English about some great deals on their handbags, shoes, and household items. We ignored their pleas and continued via escalator to the third floor, where discount pearls and pearl jewelry are sold. We proceeded onward to a back corner stairway, and headed up one more level, where only the finest pearl jewelry was for sale. We turned right and snuck through a small entrance providing direct access to a “secret” roof-top terrace/garden. It was a glorious, private panoramic view of Beijing, with the CBD in the distance to the west and a clear view of the main tower of the 600 year-old Temple of Heaven to the east. We could also see the south Chinese Gate of Tiananmen Square. I thought the roof-top garden was the conclusion of the tour, but I was wrong. Next, came a lovely ride along the Houhai Lakes, north of Tiananmen Square, which had been dug in the Yuan Dynasty (14th century) to berth barges from the Grand Canal and bring goods from around China and beyond to the Emperor in his nearby Forbidden City. The leafy, once-Bohemian neighborhood, now lined with chic and trendy bars, boutiques, restaurants, and tourist Pedi-cabs, was just a drive-by en-route to our last attraction, the NCPA: Beijing Opera House, affectionately called “The Egg.” 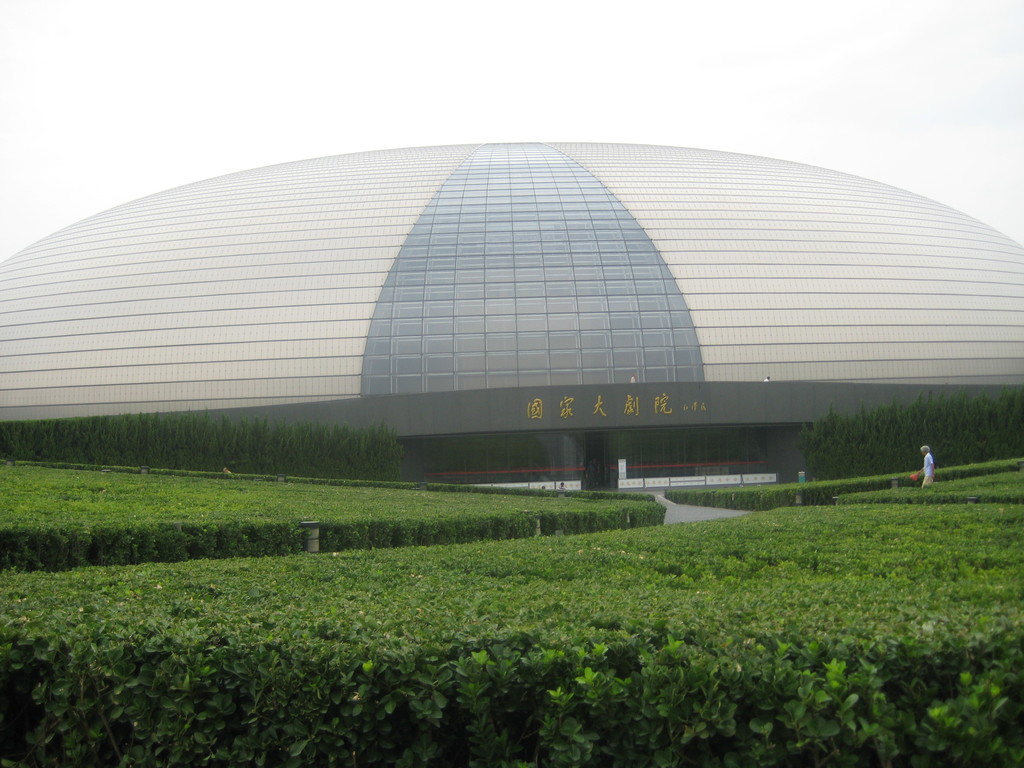 Here, we once again parked the motor bike and got out to take a closer look. Newly completed in 2007, the 130,000 square foot, ultra-modern elliptical dome of titanium and glass, seats 5,452 people in three halls. It was designed by French architect Paul Andreu, who surrounded it by an artificial lake. Lit at night, it provides a dramatic contrast to the nearby 1959 formal Soviet-style Great Hall of the People, designed by Zhang Bo, where legislative and ceremonial activities are held.

This two-hour tour was all I had time for on this trip to Beijing. However, after learning more about Beijing Sideways’ full-day and over-night motorcycle side-car trips to the Great Wall -- including hiking and a first-quality French picnic atop one of the wall towers, I was determined that on my next trip to China, I would have to head out on a Wall hike. Canadian Jacques McNeill, told me that the Wall trip was so romantic, that he actually proposed to his girlfriend atop the tower! I would return to Beijing with my 12-year-old son for a Great Wall Hike. He would tell me that the motorcycles are “Awesome!” and the Wall, “So cool!” But that story will be a new and even more splendid adventure to share soon.

Beijing Sideways has five full-time “Insiders” (their term for their “unofficial guides”) and two part-time Insiders. They speak English, French, Spanish, Italian, Romanian, Dutch, German and Chinese. They have taken just honeymoon couples to groups as large as 80 conference participants. So far, their oldest guest was 86, but they have even taken six-month-old babies on the city tours. The Orchid (65 Baochao Hutong, Dongcheng District; +86 10 8404 4818). Just opened in April 2011, in a restored and revived traditional hutong home, the Orchid is a 10-room, boutique sanctuary in a thrillingly local setting. The new hotel is ancient on the outside but truly modern in the inside -- from the design to the everywhere-free-wifi to the comprehensive wine and beer bar that includes such signature local brews, as “Iron Buddha Blonde,” infused with tieguanyin, a premium oolong tea. The transformative collaborative vision of a Tibetan accountant, a Canadian chef and tea exporter, and a Hong Kong architect, I am afraid this will not long remain Beijing’s best kept secret hideaway with knockout terrace views of the Drum and Bell Towers. (Doubles from 600 CNY.)