Journalist going to Paris next week

Hi Everyone. This is my first time posting on here. I'm a Chicago-based journalist who has written for a variety of outlets including: Travel + Leisure, American Way, TIME magazine/Time.com, Chicago Tribune and Chicago Sun-Times. I'm going to Paris next week for three days and I'm looking for tips, suggestions. (This is my first chance to really explore Paris even though it is a quick extended weekend trip Fri-Mon.)

I'm trying to find unusual things to do  to pitch or that haven't been written about extensively. If you have suggestions. Please feel free to email me at dreiss100@gmail.com.

I'd suggest that you get in touch with Christine Cantera of WhyGo France (http://www.francetravelguide.com/) and Robin Locker Lacey of My Melange (http://mymelange.net/) for Paris suggestions. Also, please take a look at this post I did on my own (and sort of epic) 8-day trip to Paris:

Good luck and have a great time in Paris!

Dawn  ...Please forgive me for sounding cynical as well as arrogant,  There are so many journalists/bloggers in Paris that if a  place has not been discovered, it probably isn't worth discovering.

If I had to do a "unique" article, I'd probably go to an out of the way neighborhood (emerging) and walk into each and every store, bar, cafe and sit on a bench there,  look and feel ...and discover the secret places you can only find if you're not racing.     Best, Karen

Permalink Reply by Ed Wetschler on May 1, 2011 at 9:53am
Also, Tripatini member Monique Wells might be able to help you. She knows every street, shop, cafe, gallery, and book vendor in town.

It is great to hear that  you are going to France soon! I would also suggest coming to Peru some time; there are still not very well-known places  (undiscovered ones) which you might find useful for you to write your articles and show the world other grreat choices to have their own holidays! www.TOURinPERU.com

Dawn, I'm a real animal nut and I've always wanted to go to the Cimetiere du Chien or the pets' cemetery in Paris. It's in the northwest of the city and I think there's a story there at least I'd be your first reader! esp if you take some great pics. I jsut checked on wikipedia and got a great article in french and i used that google translate thing but i dont know how to link to the translation so i'm pasting it in here for you, excuse the weird English. Apaarently it's the worlds oldest pet cemetery and has some famous residents including Rintintin. Cool idea no?

The Cemetery of Dogs is considered the first pet cemetery established in the world. It is Asnieres-sur-Seine , a suburb northwest of Paris .

The author George Harmois feminist and journalist Marguerite Durand , director of the newspaper La Fronde founded in 1899 the French Society of anonymous cemetery for dogs and cats. The company acquires land on a former island in the Seine, Island of Pests. The cemetery hosts while the remains of domesticated animals, dogs, cats and birds but also other animals including horses or lions. For some of the vaults are constructed or imposing monuments.

Were originally planned to build a columbarium and a museum devoted to pets, but only the gardens, the entrance building and the cemetery, divided into four wards for dogs, cats, birds and other animals will be realized. The Parisian architect Eugene Petit, who has directed several buildings in Paris, designed the portal of entry in the style Art Nouveau .

In 1976, the arm of the Seine is closed. In 1987, the owner decides to close the cemetery. Given the excitement generated, the city of Asnières announces plan to buy it and to keep active. The same year he was ranked in the inventory of historical monuments to "interest at once picturesque, artistic, historical and legendary." The city becomes the owner of Asnieres in 1989 and managed since 1997.

In 2001, the cemetery was renovated and new landscaping has been done.

Couldnt resist, I did a google image search and here are some images. Paris's pet cemetery rocks!! Pls let me know if you write about it, i'd love to read your article. 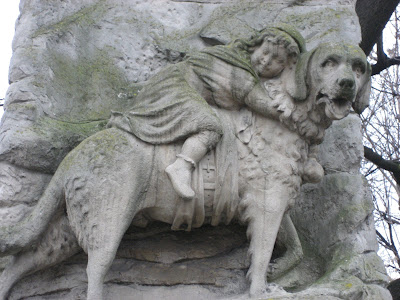 There is so much you co in 3 days...and Paris has quite a lot to offer as unusual and off the beaten track activities...What is your focus?

Let me know...I can make some suggestions before you leave!

How are you doing?

Thanks to Tripatini, I am finding you, hope get to know well each others. I see you are journalist traveling; it a good opportunity to get to know you and know about new places too. I am proposing tour press in order in Morocco.
I will keep you in touch and tell you exact date and program too.

Tell me more about your propositions what we can do exactly or if you have an idea...?

I am looking forward to your answer
Waiting, best regards
--
Farid ZAHIDI. Mr