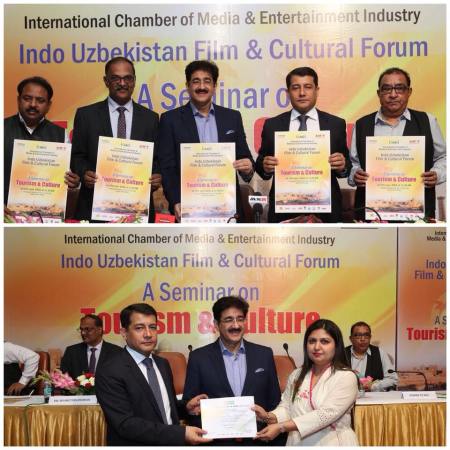 Noida: A national level tourism Summit was organized by Indo Uzbekistan Film And Cultural Forum in association with Asian Institute of Hospitality and Tourism at Marwah Studios, Noida film city.
“The purpose of the summit is to inform all the tourism industry of India about the growth of the tourism sector in Uzbekistan, our relation with the country and the recent visit of film and media delegation to Tashkent,” said Sandeep Marwah President of Marwah Studios and Chair of Indo Uzbekistan Film And Cultural Forum.
“We have very strong historical, political and economical relations with India. IUFCF – Indo Uzbekistan Cultural Forum will enhance our day-to-day dealing between people to people of two countries. Under the leadership of Sandeep Marwah we have achieved a lot in a short period of time. We are liberal in granting visa to Indians so that they can visit beautiful country Uzbekistan for better opportunities,” said H.E. Farod Arziev Ambassador of Uzbekistan to India.
A poster was launched in order to highlight the Tourism and film activities between the two countries. Ashok Tyagi, of ICMEI and Dr. Mohan of AAFT also spoke on the occasion. All the members of the delegation who visited recently were honored with the life membership of INDO Uzbekistan Film And Cultural Forum.
Sandeep Marwah honored and Presented H.E. Farod Arziev with the life membership of International Film And Television Club of Asian Academy of Film And Television in the presence of large number of professionals from film, television, media and tourism fraternity.