The Sanctified Seats: The Monastery of Ethiopia's Mount Damo That Friday, when the Lord was on the Cross, an angel named Ourael took the blood of Christ in a glittering cup and sprinkled it all over the Earth. All grounds that received a drop of the holy blood were chosen to be sanctified and blessed places to establish churches on them and made them their holy seats. So Ethiopian Orthodox Church history recounts.

The following writings are to give histories and descriptions about the churches and monasteries scattered all over Ethiopia. Read those words of ours while you prepare your luggage to fly here!

Climbing with rope like driving with a seat belt

Your visit to this amazing church will not only require you to put your seat belt and drive there but also to get ready to climb by a side of mountain with rope in your waist. This will not only be unforgettable but one that will come to be a great breakthrough in your entire visits to all the churches that you had been to so far and those you are about to. 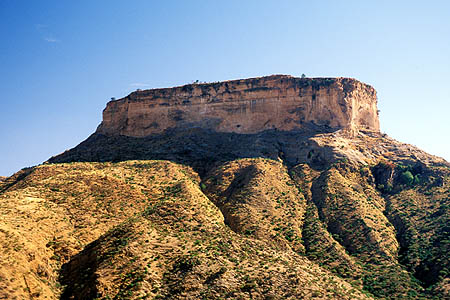 The hermit, after he had chosen Mount Damo for his extended prayers, begun to lament for he had no means of climbing to the top. ‘Had I been a bird I could have flown or at least if I had some rope…’ so were his thoughts. This did not last long thoughas Angel Michael approached the zealous hermit and spoke, ‘Don’t be afraid for you are given the authority. Take some rest and the Lord God will send you a snake rather than a rope that will deliver you to the uppermost of the mountain.’  All at once a snake of about 30 meters length appeared and took the hermit by its tail while Michael the Angel protected the him so the serpent would not dare to attack him.On his arrival at the top of the mountain the hermit, Abune Aregawi, praised his God saying, ‘Hallelujah’. This was the beginning to the astounding monastery established at Mount Damo, in Tigray, Ethiopia.

Today, in the example of that serpent, a thick rope is wiggling down the side of the mountain serving visitors and believers as the only means of passage to the church at the top. This rope has been there over so many years; not changed or repaired. Millions of people had climbed on it and even more sheep and oxen have been taken up by this same old rope.

If you want to climb, another rope will be send to you from the top that you have to fasten over your waist, and then you have to hold the one made in the example of the serpent so that you can help the person pulling you up.  Your climb is estimated from 24-to-30 meters. This includes only the distance until the climb is finished; not the overall height of the mountain.

Women are completely forbidden to enter the monastery. Animals of female sex are also forbidden except for hens. It was and is only the mother of Abune Aregawi that had been to this monastery after her death following many years of fasting and prayer at the foot of the mountain. She was buried there.

Atsie/King Gebre Meskel had built stairs that led to the monastery before the rope had come to use. All the materials to build the Church had been transported on these stairs. Once the construction was done, however, Saint Aregawi did not want the stairs to stay on service. And he spoke to Atsie Gebre Meskel, ‘Dahmimo’ meaning ‘destroy it’. Through time the word was shaped and reshaped to Damo.

Reaching at the top you will see spacious green field.  One Church, over 150 ponds, and three villages of the hermits are all on this space. The church was built in the 6th century after the birth of Christ by Atsie Gebre Meskel. Every hermit in the monastery has his own one prayer room, one saloon and one kitchen with a spring as though the onesin the modern world with tap water. Lines of thin ditches are interlinked passing water for those hermits who do not have springs in their kitchen. And for those who do not use water neither from the springs nor from the ditches, three wells, one for drink; one for the animals in the monastery and one for washing clothes and home duty are available in an average position for all the three villages.

In August 1989, the hermits had heard a huge blast and run to where the explosion had went. Reaching the store where many priceless things had been kept they saw the striking event: fire burning all over the store. They could not extinguish the furnace though tried hard. Many relics and invaluable books were turned to ashes by the fire.

Your visit to this historic monastery will be finished here and you will have to fasten your waist by that same old rope to climb down. Then drive to the other miracles awaiting you a few miles away.