Powerboat Cruising in the Salish Sea of the Pacific Northwest

I went to one of the top 1,000 places to see before dying. As I keep coming back, there are probably still 999 to go. Seeing the San Juan Islands of Washington automatically includes memorable activities such as sighting eagles, fishing, crabbing, beach walking, nature parks, sailing, kayaking… you get the idea. What I like to do in the San Juan Islands is take a boat out of Bellingham. Once underway, I skipper myself into a nirvana harbor. I will list here several such harbors that induce nirvana.

Route map through the Canadian Southern Gulf Islands and the San Juan Islands of Washington.
(map modified from the original on Wiki Commons)

Other ways to see the islands include small airplane, float plane, and ferry ships. Lodging is available at all the best places, so being a yachtsman with a bunk isn’t necessary.

The San Juan Islands are located in the northwestern corner of the state of Washington, and nearby are the Canadian Southern Gulf Islands. Combining these islands we have an archipelago in the Salish Sea where the locations for finding nirvana just doubled.

Skippers holding down a day job need not shy away from this trip but for safety’s sake hire a person for refresher training. Bellingham Yachts will charter the boat and provide training or help contract a training skipper to ride along for two days. Once feeling capable, put the trainer ashore at a ferry dock and resume the trip.

My recent charter was a 33’ Back Cove power boat with most of the comforts of home. The boat does over 20 knots which is a unique experience with a large boat (John Kennedy and PT-109 anyone?). As relaxing is a part of reaching nirvana, I chug along at six knots and save fuel to boot. My total fuel bill for the trip described below was only $167 and at times I did open her up for fun. 33' Back Cove diesel with trim tabs from Bellingham Yachts

A circular route out of Bellingham and into the Southern Gulf Islands, then down to the San Juan Islands and a pleasant cruise back to port is one recommendation. During this run there may be seen orca whales (Orcinus orca) in the waters from April through September.

On this trip, I anchored in Lyall Harbor, Saturna Island, between tree covered hills. Ashore on the island is the Saturna Winery and pleasant walks. In fact, nearly all islands have vineyards and winery locations since the region is warmer than the general northwest. Three hours (at nirvana speed) from Saturna is popular Ganges on Salt Spring Island. Excellent prepared food is available in the market deli and at local restaurants. My wife likes Ganges because of the shopping and unique items in the jewelry store.

On leaving Canada, transit south to Roche Harbor on San Juan Island. I used a guest dock and relaxed over a beer while contemplating how Capt. George Pickett (later of Pickett’s Charge at Gettysburg in the US Civil War) once looked on these same hills. Britain and the USA faced off here in the “Pig War” of 1859. Above the docks are a fine restaurant, a café, a market, a hotel, and public art displays. 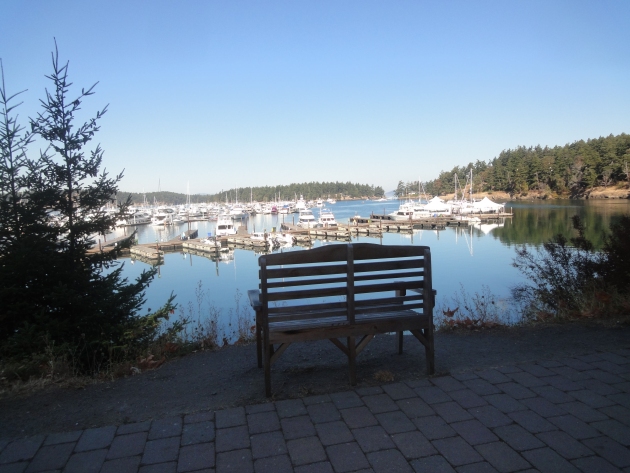 Friday Harbor is around the bend from Roche Harbor and it is the main city of the area, along with being the islands ferry route terminus point. If coming in by ferry, this is an excellent place to stay and tour. Boaters will enjoy the docks and easy walk for shopping and meals.

Seeking a final day of peace and quiet, the next destination is Deer Harbor. It is a good harbor for anchoring or use a guest dock with services ashore. This is a beautiful place. 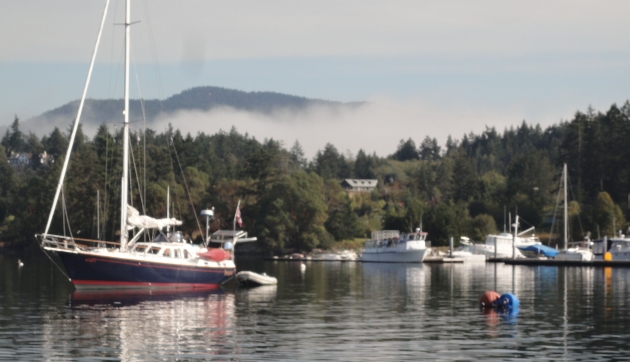 On Orcas Island is the East Sound with an airport and resorts accessible by boat. Other popular destinations are sheltered coves with interesting views of the transiting ferries and small boats.

Underway from Deer Harbor, I headed east seeking out the smaller islands and passages for a last look. Exiting the San Juan Islands via Thatcher Pass, I motored past the Anacortes ferry pier which is the nexus of the island ferry and a feeder to the freeways inland. Anacortes public marina is a short walk to a favorite seafood restaurant, Randy’s Pier 61. Anacortes offers many shops with art and general merchandise.

Returning to Bellingham from Anacortes is a three hour run if still operating at nirvana speed. The boat is due back in the morning so the last day is always an early start. On this trip, however, the risk of morning fog caused me to run back on the night before and I gave up dinner at Randy’s for another favorite place, Anthony’s at Bellingham Marina. Better safe at home port with a crab cocktail, I figure, than late for the plane home.

All photos by Allan D. Kissam

Nice. Always wanted to cruise there.