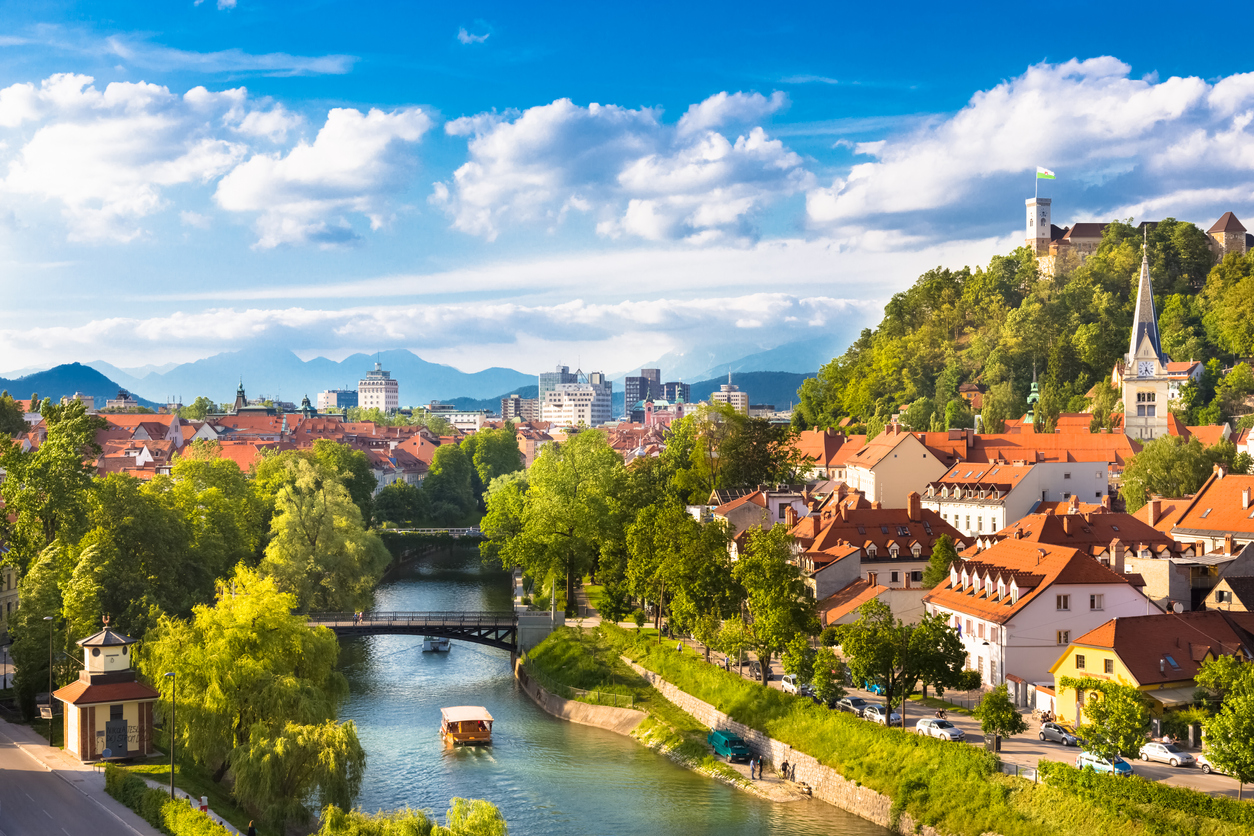 One of Iberia's newest destinations, with direct flights from Madrid during the summer, Slovenia is a little jewel of an Alpine country, once part of communist Yugoslavia and now a prosperous member of the European Union, landlocked between Italy, Austria, and Croatia. Today we're focussing on its handsome capital Ljubljana, whose gracious architecture, lovely green spaces, laid back vibe, and tasty food make this an under-the-radar treat to experience. So here's a little intro! 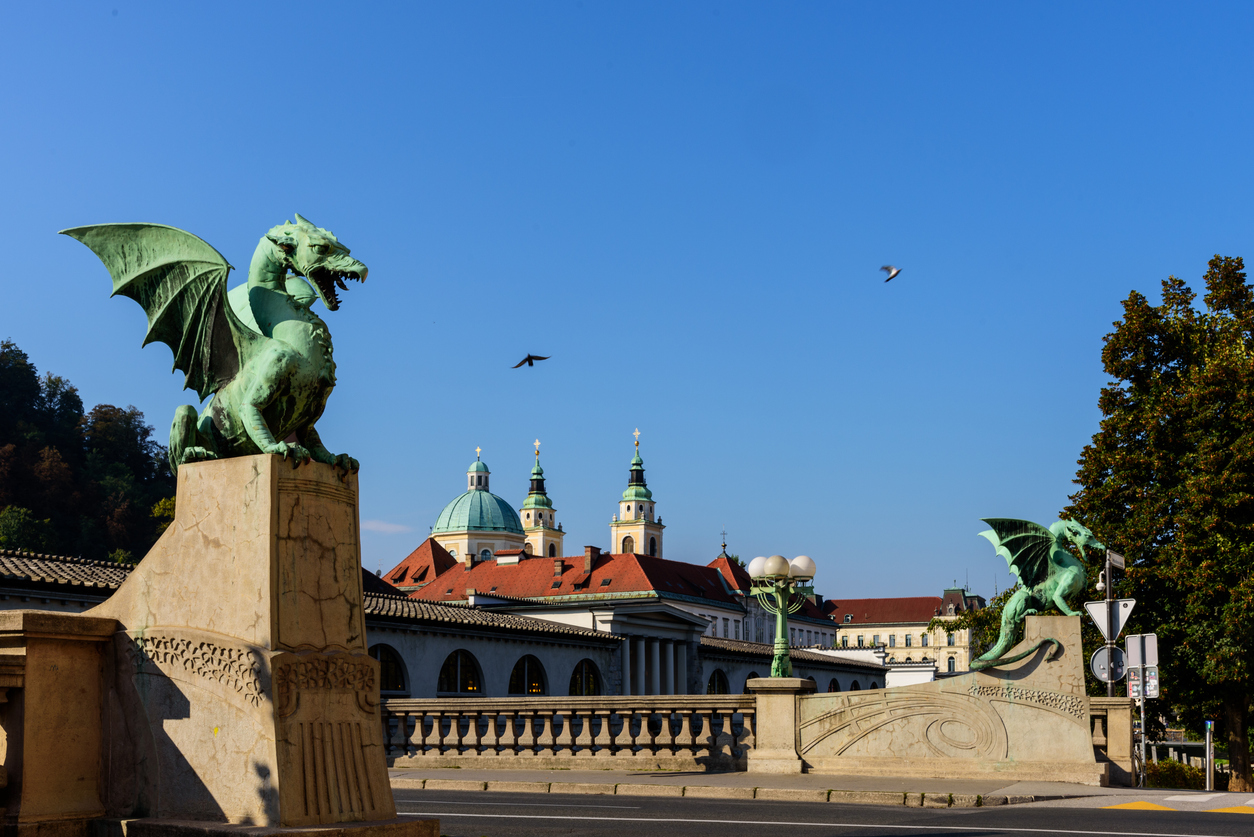 First off, once you're here, one thing you can't help but notice is dragons, dragons everywhere. The fearsome firebreather became a symbol of the city long ago thanks to the ancient Greek myth of Jason and the Argonauts, who as the story goes, whilst in search of the legendary Golden Fleece camped out one winter here and here slew a dragon which has become the city's symbol and whose spirit supposedly still guards Ljubljana to this day. You'll see winged lizards everywhere, in both souvenirs and statues - most famously in more than 20 statues on famous Zmajski Most (Dragon Bridge, above) across the Ljubljanica River. Built in 1901 as one of Europe's first concrete spans, it's considered a premier example of the early-20th-century Vienna Succession style (Slovenia was then part of the Austro-Hungarian Empire).


The city's foremost landmark and other main icon is the Ljubljanski Grad (top, at above right), the sprawling castle looming above the old quarter and dating in its current form from the 12th century and extennsively overhauled in the succeeding centuries. You can get to the top of its 375-metre (1,230-foot) hill either by funicular or on foot - and I recommend the latter as the trio of roads leading up to it wind through lovely woods - then cross over a 17th-century bridge into the keep, with its Archers and Erasmus Towers (the former also home to the Strelec restaurant, offering a contemporary take on medieval Slovenian dishes), St. George's Chapel, interactive Slovenian history exhibition, and puppet museum. The 90-minute "time machine" tour with costumed guides is also entertaining, but perhaps the best part of the whole business is the spectacular 360-degree panoramic views out over the city below. 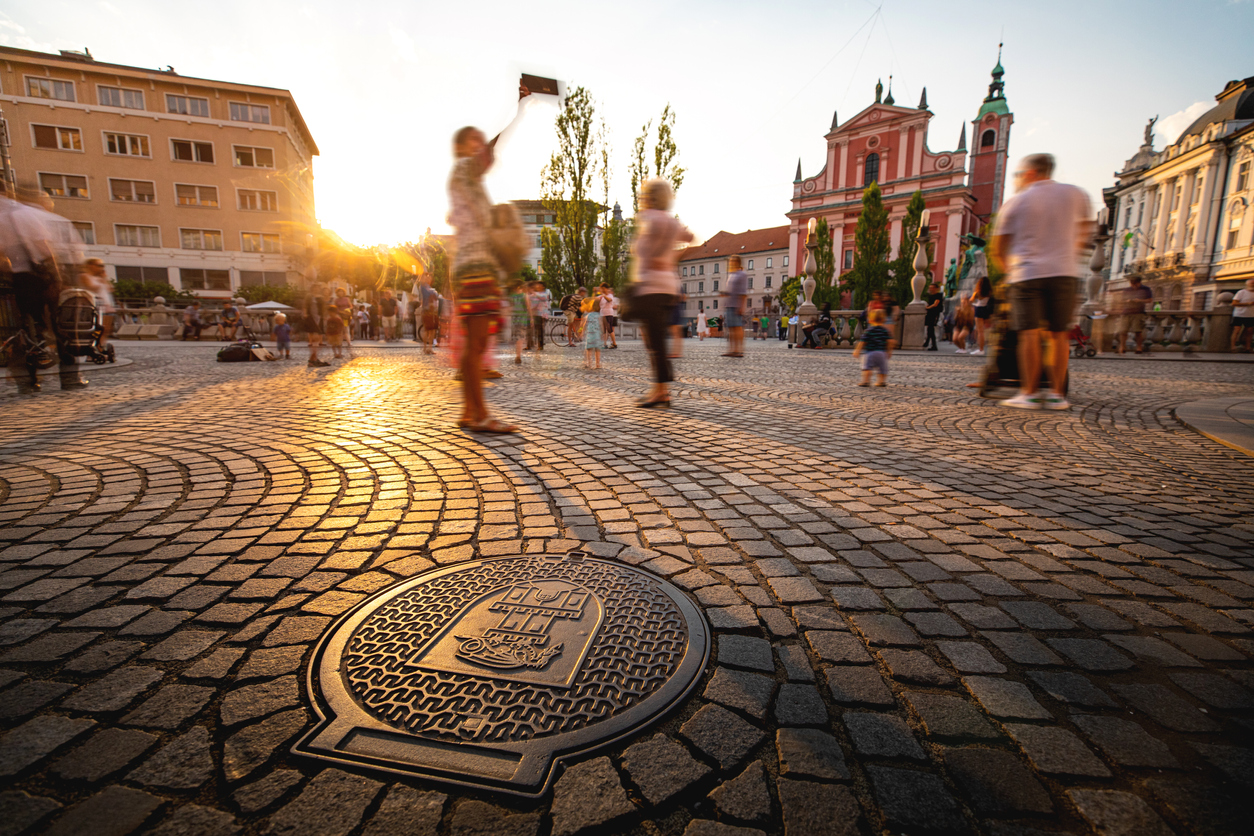 Back down in the old town, the central hub is Prešernov Trg (above), a square you'll likely find yourself passing through repeateadly, with a lively ambiance fueled not just by the comings and goings of locals and visitors alike but also a bunch of bars and pubs as well as restaurants serving typical Slovenian fare. Its main landmarks are the pinkish Baroque Frančiškanska Cerkev (Franciscan Church of the Annunciation), built in the 17th century and redone in Baroque style in the 18th; a statue of the square's namesake France Prešeren (an early-19th-century poet considered Slovenia's greatest), and the graceful stone Tromostovje (Triple Bridge) leading across the Ljubljanica to the more modern part of town.

Other musts in the old town include the green-domed Stolnica Svetega Nikolaja (St. Nicholas Cathedral), its current Baroque form dating back to the early 18th century. Then there's the 15th-century Rotovž (city hall, aka the Magistrat), also Baroquely tarted up in the early 18th), with exhibitions, a guided tour and whose bell tower plays Beethoven's Ode to Joy. Finally, the Narodni Muzej Slovenije (National Museum of Slovenia) is a neo-Renaissance pile put up in 1821 which in addition to its opulent architecture (check out the ceiling over the main staircase) has some fascinating displays, including archaeological artifacts, coins, and applied arts - and not just Slovenian, as evidenced by its current exhibition of Coptic textiles.

And about those green spaces I mentioned in my intro, they along with the municipal government's enlightened, eco-friendly policies led to Ljubljana being named 2016's Green Capital of Europe. And its most prominent parks include Miklošič Park, built in Art Nouveau style in the first decade of the 20th century; the 210-year-old Ljubljanski Botanični Vrt (Ljubljana Botanical Gardens), with more than 4,500 plant species thriving on two hectares (five acres); and most important of all, Park Tivoli, the city's largest, its 510 ha. (1,260 ac.) landscaped with broad promenades; lovely flower gardens; nice woodsy patches; statues; and a rectangular pond. There are also a number of prominent buildings including a greenhouse run by the Botanical Gardens; the neoclassical Tivoli Palace (now a cultural centre); and the Baroque Cekin Mansion (now home to the National Museum of Contemporary History covering the 20th century to the present). 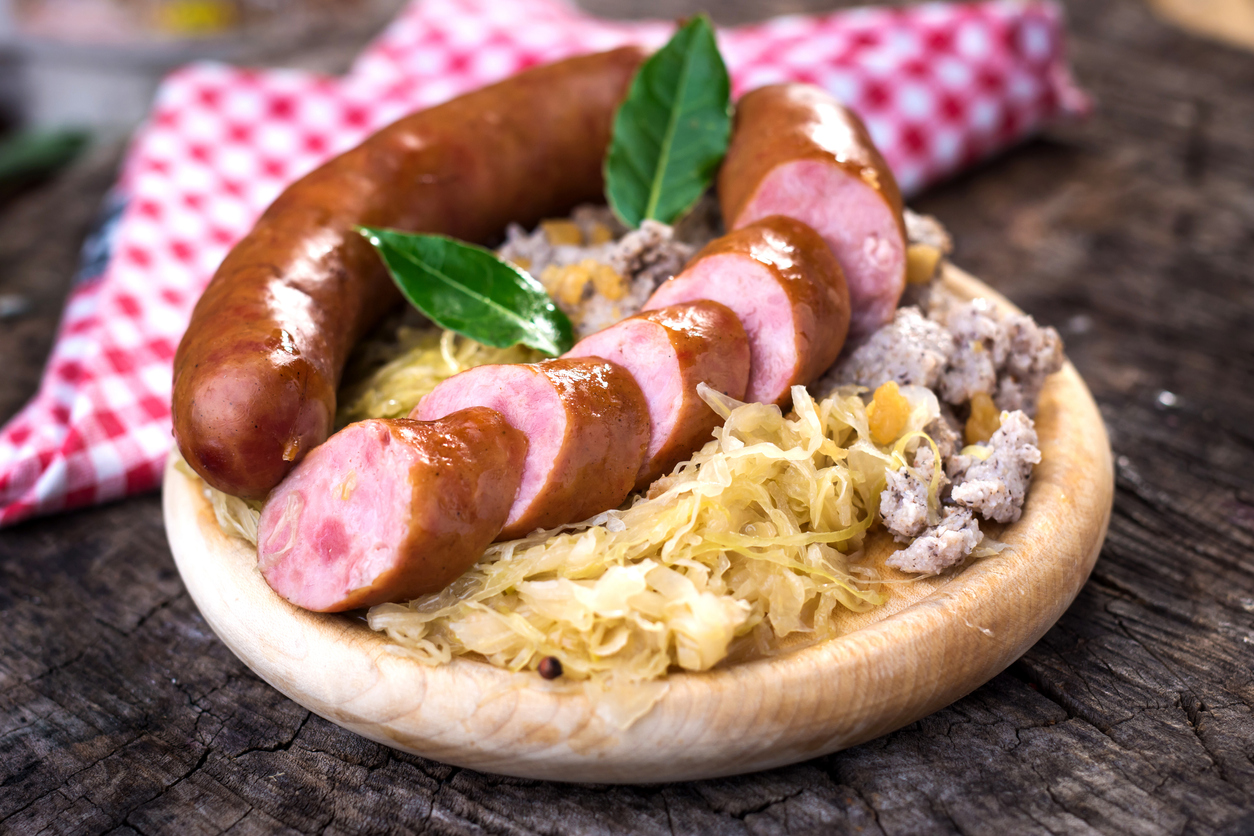 And of course being the foodie I am, no way can I sign off without mentioning some of the homely but utterly delectable local eats. If you're familiar with other Eastern European and especially Balkan cuisines, you'll notice some similarities, most notably the country's top food star, kranjska klobasa (Carniolan sausage, above), made of smoked pork, bacon, black pepper, garlic, and sea salt, and commonly served with sauerkraut, mustard, and crusty bread. Another standout, with similarities to goulash, is bograč, a stew of pork, beef, venison, and boar simmered with potatoes, onions, spices, wine, and sometimes mushrooms. Stews are actually pretty popular here, such as another one called jota, hailing from the Slovenian part of Istria on the Dalmatian Coast and made of made of beans, sauerkraut or turnips, potatoes, bacon, and beef ribs. The country is also known for, among other treats, its own variety of prosciutto and its amazing honey. And speaking of sweet touches, this savoury list has plenty of them to finish off a meal - one of my favourites is potica, rolled-up pastry often filled with ground walnut paste, and also sometimes raisins or other pastes including poppyseed and hazelnut.

It all sounds pretty sweet (as it were), don't you think? So what do you think - see you in Dragontown this summer? ;)