Hangzhou, an extension of the quintessential water towns of the Yangtze River delta unfurls with each brush stroke of past and present travellers. Ibn Batuta, the Moroccan traveler and scholar, was overwhelmed by the beautifully 'crafted and painted Chinese ships with silk awnings sailing the canals' of the largest city he had ever seen.  Hangzhou (roughly pronounced " hung-jo") had a similar effect on Marco Polo, the Italian wanderer, awestruck by the physical beauty of the “City of Heaven”. To him it was ‘a magical potion that provides a literal and metaphoric breath of fresh air emanating from the calm waters of West Lake'.

Enthused by tantalizing lyrical descriptions of Hangzhou, our two-plus-hour journey from Suzhou stretched endlessly till we entered the modern commercial mayhem of downtown Hangzhou, a city that in its present incarnation is far removed from whimsical images of Batuta and Marco Polo. We were booked at Hangzhou Merchant Marco Hotel on Pinghai Road, Shangcheng (thanks to our tour company), right in center of clutter and chaos of every day life. The one advantage was that the hotel is walking distance to the famed West Lake. 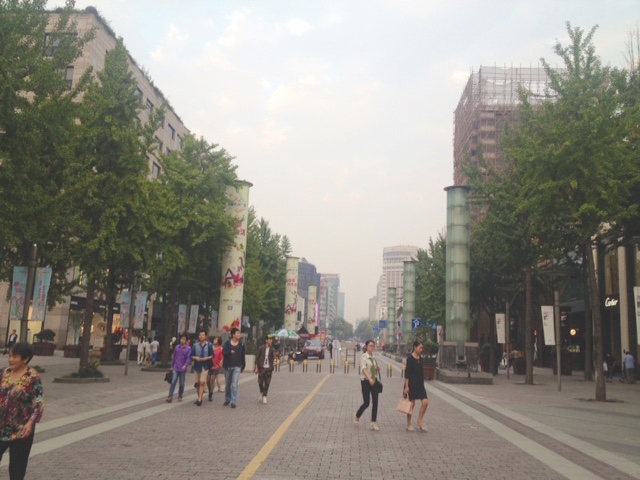 Fifteen minutes through the busy market area of traditional stores cuddled between cycle-for-hire-shops, McDonald's, KFC, newer and under-construction shopping malls flaunting western designer names, Hangzhou now boasts the biggest Apple showroom in China, restaurants and Chinese eateries and we were facing West Lake. In choosing the lake we missed out the Old China Street (He Fang Jie) on other end of the hotel for a look at Hangzhou silk and fans. Hangzhou is the lake, and though the haze and people negated any romantic notions of “Ripping water shimmering on sunny day”…written by Su Dongpo (960-1127), the famous Song Dynasty poet when he compared the lake to Xi Zi, the most beautiful woman of China.The scenic beauty of the waters embraced by mountains on three sides have been an inspiration for Chinese artists and scholars for centuries, and in the present it is an inspiration for gawping tourists streaming to catch a glimpse of the famed waters.

Our visit had coincided with the first weekend of the 2014 National Holiday, and the haze and footfalls obscured the poetic visions of the placid and grey waters of this man-made lake. A walk along the promenade, avoiding the profusion of selfies and V-signs, and we decided to watch the water acrobatics show and grabbed the first available vacant spot, on a stone bench, for a vantage viewing position. Moments later, I felt a nudge from the back and guessing what it meant shook my head in a ‘no’. Language is a barrier and the nudge and head-wagging continued for some time till the lady understood and let me concentrate on the water show. Midway, we decided to move out before numbers swamped us in. The 'nudge lady' gleefully hoisted herself in my place, beaming, for a protracted elbow joust.

It was still to early to call it a day (8 pm), but the streets were now more heads than tarmac and a brief walk around the Hyatt hotel and a stop at the nearest McDonald's for burgers, we headed to our hotel. 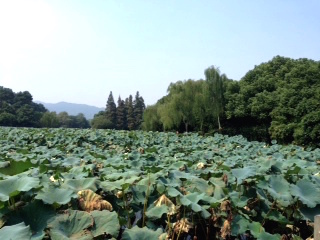 The next day, hoping for a relatively peaceful viewing, gladly followed our guide to different corners of the West Lake. I closed my eyes to imagine the 'descending herons' and 'blossoming lotus' and all I could see was miles of green leaves in the "Lotus in the Breeze at Crooked Courtyard" by the western shore of the lake. September is not the month for flowers, and instead of herons and fairies and the best time to appreciate lotus flowers in full bloom is in summer. The vantage viewing points are Three Pools Mirroring the Moon, the Lakeside Park on the East Bank, the West end of Bai Causeway, the Little South Lake, the Inner West Lake and the Xiling Bridge. The ideal place is supposedly Quyuan Garden, whose ‘breeze-ruffled Lotus in Quyuan Garden’ is one of the top ten views of West Lake. Myths and legends surround Chinese structures and West Lake is a result of one such tale. Legend the highest goddess stole a precious jewel from a golden dragon and jade phoenix and revealed it on her birthday. The duo decided to reclaim the jewel and in process the jewel fell on earth o the spot where the West Lake is. With such an alluring legacy it is but natural to be over awed by this 2334 sq. yards man made illusion. But there are different ways to admire the lake and one can bike, hike or simply slump under a tree with a book or a sketchpad to read or doodle. West Lake is considered one of the best biking routes in China and this probably accounts for biking hordes around Su Causeway and Bai Causeway, as motor vehicles are not allowed in these areas.

The colorful painted dragon boats are tempting rides and so are row-yourself boats. Cruises are available day and night and we had a raucous group of Western teenagers as fellow passengers. The ride was aimless as the drizzle and haze obscured extended visions of the landmarks of the Lake, the Twin Peaks Piercing the Clouds or the "Three Pools Mirroring the Moon”. The best time to view the pools is during nights of Mid-Autumn Festival, as candles are lit inside each of the three mini-pagodas, and the candlelight along with moonlight casts its reflection on the water. 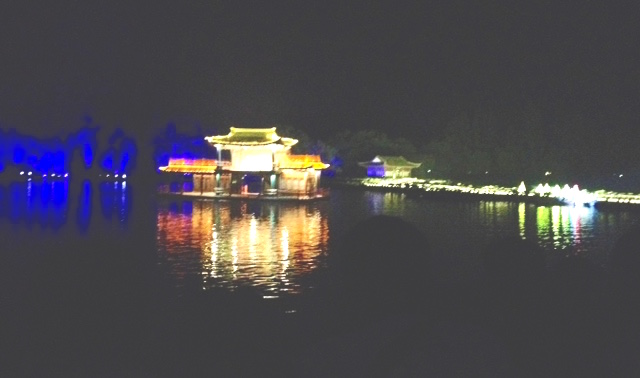 Evening is a better time to ride the waters, but we had another treat, the 'Impression West Lake' a jaw-dropping light and musical theatrical production transforming the waters into role -play. The show is a creation of famous Chinese director Zhang Yimou and world-class musician Kitaro, is ‘a mix of Disney spectacle rolled into part Shakespearean theater with Eastern sensibility’. The waters come alive to a fairy tale in five acts: "Encounter", "Fall in Love", "Say Goodbye", "Memory", and "Impression”. The music and rainbow hues add to the magic and illusionary effects of gargantuan emotional escapade. The show, staged on the north bank of the lake, opposite Yuefei Temple and Shangri-la Hotel, is a people magnet and I guess we could not have managed tickets on our own. 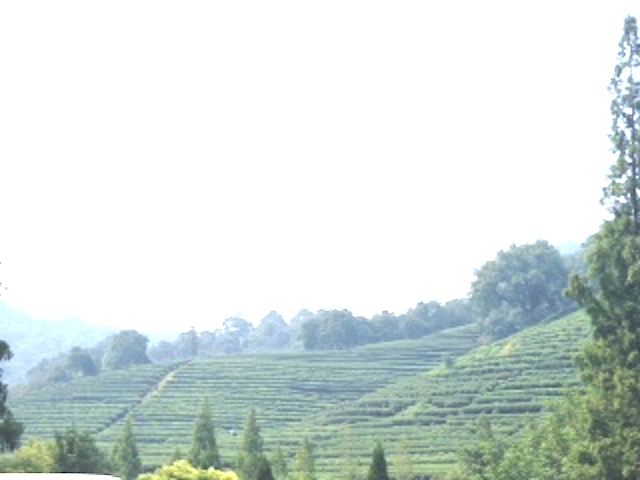 In between the visit to the lake and the evening show was the drive through the mist and clouds that enveloped the mountains, adding a touch of mystery and romance to the green ‘goose bumps’ of camellia sinensis dotting the landscape. I was not listening to the guide, but was lost in the numinous serenity away from the footfalls of the city. Hangzhou is famous for Longjing (Dragon Well) variety of green tea and we were given a one to one opener on the process from planting to plucking at the National Tea Museum. I regretted not picking up a packet of Dragon Well tea, thinking of doing it later as the aroma and flavor is unique, more to do with the waters and the environs.

The major tea-producing areas are the Meijiawu Tea Village situated on the west of West Lake and one of the Four Famous habitats for Longjing tea. This picturesque village has supposedly the best dragon tea variety. Tea picking coincides with seasons: It is Mingqian Tea before Pure Brightness (the 5th of the 24 solar terms); Yuqian Tea before Grain Rain (the 6th solar term); Sanchun Tea before Beginning of the summer (the 7th solar term) and Sichun Tea one month later.

Soothed by cups of Longjing tea and the breezy mountain air, we continued our environmental theme and drove to the famous Buddhist temple, Língyǐn Temple, built in AD 326 by Huì Lĭ, an Indian Buddhist monk who visited Hangzhou in the 4th century. The temple is an astonishing piece of ornate and gilded architecture, especially the Hall of the Four Heavenly Kings, with its four vast guardians and a cabinet housing Milefo (the future Buddha) and difficult to believe that it had been destroyed and restored no fewer than 16 times.

Equally impressive is the magnificent 20-meter-high statue of Siddhartha Gautama (Sakyamuni), sculpted from 24 blocks of camphor wood based on a Tang-dynasty original. Behind the giant statue is a montage of Guanyin surrounded by 150 small figures, including multiple luóhàn (arhat), in a variety of poses. The earlier hall had collapsed in 1949, crushing the Buddhist statues within, so it was rebuilt and the statue conceived. During the Five Dynasties (AD 907–960) about 3000 monks had lived here. But it is the nature walk along Fēilái Peak or Fēilái Fēng (Peak Flying from Afar), said to be transported here from India and flaunting 470 Buddhist carvings, dating to the 10th centuries, on the mountain walls or hidden inside grottoes that summed up the ancient entirety of Hangzhou. The 209-meter limestone craggy mountains hidden by trees and greenery are pure limestone and an incongruity amongst the surrounding sandstone mountains. The different-size stones scattered along the peak resemble animals like a flying dragon, a running elephant, a crouching tiger, and a fleeing monkey. The caves resonating with gurgling streams, shelter about 330 stone statues, dating from the 10th to 14th centuries, in different poses and the most prominent is the Laughing Maitreya Buddha, sitting on the cliff along the stream with exposed breast and belly storing all of the world's troubles. In 1993 "China Grotto Art Garden" was set up around the Fei Lai Feng, facilitating the study of the engravings and carvings. There are other temples that can be explored, including Yǒngfú Temple and Tāoguāng Temple. Behind Língyǐn Temple is the Northern Peak (Běi Gāofēng ), which can be scaled by cable car.

This is a perfect place to spend hours in quietude in company of the Buddha, but I was brought back to the present by a cheesy comment disrespectful of my 50+ years.

Street food is a moving map of a city's culture but somehow our time was divided between tourist spots rather than exploring the city’s cuisine, its varied museums and markets. The drive to the airport through vast open lands made me aware why visitors rave about Hangzhou's green cover that provides reprieve from the modern ‘poor little rich city’. Maybe, if we had cruised down the Grand Canal, the longest man-made waterway in the country linking Hangzhou with Beijing in the north, we might have been privy to the city of Marco Polo and Ibn Batuta, the city of colourful ships and bridges spanning the canal.