When in China it does not help to think miniscule and as I zigzag through the humongous East Guangzhou railway station and the four fold serpentine taxi queue I wonder if this is a precursor of the size of the city.

The two hour journey across the border from Hong Kong in the double-decker K 11 Hung Hom - Guangzhou Express train was uneventful, being a weekday with few passengers in the regular compartment, and the volume of conversation was low. In contrast the return journey three days later, on a Saturday, was headache inducing with non-stop high decibel chatter. My friend was at the station to receive me and I was grateful. Most taxi drivers do not speak English or even Cantonese and a non-Cantonese/ Mandarin speaker has to depend on luck, carry directions in Cantonese/Mandarin, or the driver's mood to reach destination in time and within reasonable fare. My friend is a fluent Cantonese speaker and even then her road corrections failed to shorten the ride through a warren of congested lanes and roads lined by drab structures, newer skyscrapers, shopping malls and street markets.

Guangzhou has been witness to a continuous stream of travelers, marauders and settlers from the time when Guangzhou was referred to as Panyu (214 BC). The visitors were attracted by the wealth of the land and the first to come, in 786 AD, were the Persians who had ransacked the city. Next in line were the Portuguese, the first Europeans to arrive in Guangzhou in 1517, to be followed by the Dutch and later the British East India Company in 1711 and the Japanese who had occupied Guangzhou between 1938 till 1945. The British included Guangzhou in their successive list of colonial cities/ ports of call and remnants of colonial structures are still standing in Shamin Island in Liwan District that had been divided into French and English quarters by the Qing Dynasty.  Between 1757 and 1842 Guangzhou was the only Chinese port open to international trade and one of three important trading ports of the world till outbreak of Opium War and subsequent opening of other ports. At same time it was an important land route on the "Maritime Silk Road" linking southern China with India, South-East Asia, the Middle East and Africa and center of tea trade that existed between China and Europe during the 19th century. 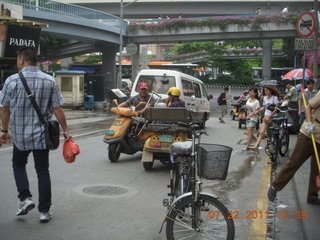 The present Guangzhou is held together by the collective dreams of locals, expatriates and immigrants and an excellent way to collect vignettes of these dreams is to wander around the neighborhood markets and labyrinth of narrow lanes. The markets are extensions of each other with tiny shops stacked with local produce, antiques, fake or real, the tailoring shops, neighborhood boutiques in a row or the crowded roadside eating places favored by families and friends enjoying tea and conversation. In one of the lanes we stopped at a lottery cum phone shop to try the 15 minute lottery. I waited the stipulated time and when the winning numbers rolled out on the computer the 2 Yuan ticket was converted into a piece of paper and not 20,000 plus as I was expecting. Maybe I should have visited the nearby temple before playing the lottery. The girl at the next door food and general store refused to face my camera letting the men folk be the models. I tried talking with her but no success. Probably I should master Putonghua/Mandarin/Cantonese like other visitors and settlers, mostly into trading, who speak the Chinese languages more fluently than the natives. signs (not everywhere) and English literal translation of Chinese words on hoardings it is difficult to communicate or find one’s way in the city. I went for a hair salon and had to endure a leisurely 30 minute hair wash as the attendants were engrossed in their chatter oblivious to my presence. The extended hair wash was a luxury but I was getting impatient to use the washroom and the 'hole in the ground version' was not very encouraging. In China, with the exception of high end restaurants, hotels and public places, the toilets are a bane. You have to plan your intake of food and drinks till you reach residence or hotel room. Finally there was a break in conversation and person shampooing my hair figured out that there was a human head under his hands. 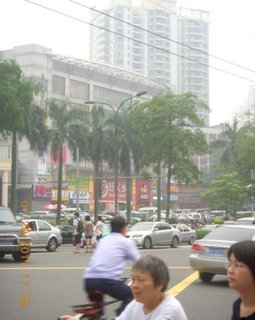 Once on the street I realized than an extended head massage would have been a better option than being pummeled by a vehicle as pedestrians are at their own risk while crossings roads or side lanes. There are road signs but the chaotic traffic and inattentive drivers, especially on inner roads, add to the confusion. Somehow we managed to reach home unscathed.

Guangzhou is a sprawling shopping city and with choice between trade edifices or visiting tourist landmarks, the Baiyun Mountains, the Liurong or the Six Banyan Tree Temple, museums or art galleries, I gave into the temptation of rummaging into various whole sale markets.  High on my list were the exclusive International Shoes Trade Center, the sprawling Baiyun World leather Trading Center (Jie Fang Bei Road) and One Link Plaza on Jiefangnan Road in Yuexiu district for gifts and accessories. Majority traders refuse to entertain single item sale and I had to take help from my Cantonese speaking friend to bargain for a single handbag. I should have scooped up dozens and then distributed them to friends especially in the lingerie wholesale market. The place for bargains is Beijing Road lined with chain stores, shopping malls and book stores. The fake markets for watches and designer brands are impulsive buys and in one the policemen were there and so were the buyers and sellers. As far as brands are concerned there are malls and plazas but unless looking for specifics, Shenzhen is less intimidating and Hong Kong wins hands down for its compactness and authenticity.

The wholesale trade and manufacturing are magnets for different nationalities to set base, bringing their culture and cuisine to co-exist with Cantonese sense and sensibility. It is an advantage because instead of only Chinese or Cantonese cuisine a visitor has choice of Russian, German, Danish, Kosher, Middle Eastern, Japanese, Korean, Vietnamese and South Eastern cuisine. Cantonese cuisine is popular throughout China for its ingenuity of including anything that walks or crawls on four legs and if averse to creepy crawlies and their entails it helps to go vegetarian.  I tried out two vegetarian places ‘Y Xin’ in Central Plaza in Linhe Xi Lu and ‘Vega Zen’, with its tofu ‘meat’ dishes, in the Tianhe district. The night entertainment scene in Guangzhou is fast catching up with Hong Kong and Shenzhen with proliferating bars and clubs. The best way to find out the places to visit is to get hold of a Guangzhou guide for the listings and try them out. An ideal getaway from the retail mania is the undulating Yeixie Park, the largest in China, with its lakes, the statue of the Five Rams, the Ming Dynasty Zhenhai Tower, the City Museum with relics dating back to the 15th century and a miniature of present day Guangzhou (separate admission).  The ‘Five Rams’ are the symbol of the city and the story is that the present day Guangzhou, the capital and largest city of Guangdong, the wealthiest province of China, was a gift of celestial beings who had descended in this area riding rams and carrying sheaves of rice.  The sheaves represented prosperity and abundance and once the celestials left the rams turned into stone and the region developed into an affluent and influential city. The Temple of Five Celestial Beings in Yuexiu district showcases gigantic footprints of the Five Celestial Beings.

What drew my attention, at the Park, were couples, Europeans/Americans, with babies in prams and I was told that these were legally adopted babies. In 2010 approximately 3401 children from China were adopted by USA families alone. The reason for the adoption trade could be the one child norm or the Chinese preference for boys and as result babies find their way into the laps of foreigners.*

Another park for an evening stroll or calisthenics is the Martyr’s Park located at Huanghuagang Hillock on Xian lie Road. The park, with 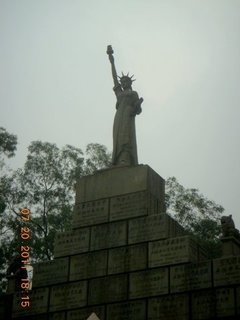 walking trails and playing areas, showcases the '72 Martyr's Memorial' built in 1918 to honor the martyrs of the 1911 mutiny led by Dr. Sun Yat-sen against the Qing dynasty. On a stone tomb is a granite monument inscribed with the names of 72 martyrs and on top is a replica of the Statue of Liberty with the torch. It was a surprise to see the replica but Guangzhou is the sister city of ‘Los Angeles’ and one more reproduction does not hurt its identity even though it says that it is a Statue of Liberty god.

The Pearl River dinner cruise* turned out to be an excellent way to see the modern face of the city that recently hosted the Asian games and is venue of trade fairs and exhibitions including the annual Canton Fair. The cruise starts from the Dashatou, Tianzi or the Xiti Piers with different options, the upper deck tickets inclusive of snacks, fruits and lemon tea while the lower deck has buffet options. The cool river breeze and the blushing effect of multi colored lights on buildings, the Guangzhou International Finance Center and the Canton Tower, the tallest building in Guangzhou and in China, and bridges adding to the Disneyland effect.

Three days and I was left wondering whether the city ever blinks. The continuous inflow of outsiders contributing to non-stop entertainment in different languages, the constructions highlighting the locals overwhelming need of space to generate money and a pot pouri of nationalities and traditions emphasize that Guangzhou’s size is its advantage to envelop any new entrant in its voluminous and laid back embrace.