Known as the "City of a Thousand Stairs" Gjirokastra is characterized by cobblestone streets and Ottoman-era houses with stone roofs and wooden balconies. Gjirokastra's historic castle is located on top of a hill. The city has a troubled past, most recently including being  center for Italian fascist invaders. 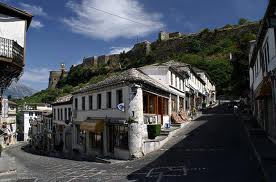 Gjirokastra is also the city of birth of one of the most famous Albanian writers, known worldwide and published in many languages, twice nominee for the Nobel Prize: Ismail Kadare. Recipient of the Prince of Asturias Award for Letters in 2009, Kadare is a honorific personality well respected in Europe and worldwide. Many of his successful books were inspired from his city of birth, most notable Chronicle in Stone. Gjirokastra was also the place of birth of Enver Hoxha, the absolutist dictator of the communist regime from 1944 to 1985.

This city has a long and wonderful history which has inspired many artists to create poems, songs, stories, etc. It's also known as the Stone City and is a major center of tourism development for cultural heritage. Along its cobblestone streets you may find traditional old markets (bazaars) that welcome visitors looking to go back in time. There is also a wonderful 13th-century castle that recalls the time of medieval rulers as well as those of the former communist regime. And many houses have been turned into inns to welcome travelers, showing off locals' famous hospitallity.

Albania remains one of the last frontiers of eastern Europe, and Gjirokastra is a must when visiting.