New Mexico takes its nickname, the Roadrunner State, from its official bird. But it’s also true that straight, fast roads make the USA’s fifth-largest state pretty easy to run around in. I’ve visited more than 20 times in 13 years, and its legendary capital Santa Fe, an hour north of Albuquerque airport, hasn’t lost its allure, with its heady cultural brew of Spanish colonial, New Age, Native American, and Wild West. But I’m just as jazzed about exploring the many small towns and such that dot the Roadrunner State. These are a handful of my favorites, all doable as day trips or overnighters from Santa Fe. Highlights include a tour of millennium-old adobe Taos Pueblo and an envy-inducing browse through Mabel Dodge Luhan’s Southwestern jewelry and pottery at her eponymous museum (a New York heiress and Vogue editor, she moved to Taos but kept shopping). Vivid landscape paintings draw collectors to galleries along Kit Carson Road and in the neighboring hamlet of Arroyo Seco.

This is a hanging-out town where everyone stops to admire and applaud the guaranteed-vivid sunset à la Key West. Prime late-afternoon perches include kid-friendly Michael’s, where the chili is legend; Orlando’s, for traditional New Mexican fare, and Graham’s Grill for mod NM. For higher-octane refueling, consider a glass of NM-made Gruet bubbly or a chile-and-tequila Bloody Maria at the Anaconda Bar in the almost painfully tasteful El Monte Sagrado Resort. If you’re a gossip stringer, your pick is Taos Inn’s Adobe Bar, where local Julia Roberts is a regular (check the mezzanine).

More insider tips: take the “high road” from Santa Fe through the mountains to Taos, not the highway. And on your trip back, stop for a soak at the recently cleaned-up (yet still far from slick) “hippie hot springs,” Ojo Caliente.

A gritty yet charming hamlet, Las Vegas was once as infamous for its outlaws as Dodge City and Tombstone, but in 1879 the new railroad brought more respectable types, including German-Jewish entrepreneurs. You can visit Montefiore Cemetery and vintage-1884 Congregation Montefiore, now the Newman Center of New Mexico Highlands University.

Dozens of landmarks from LV’s Wild West and railroad eras are mapped out in a walking-tour brochure from the visitor center at the still-used railroad depot or the Plaza Hotel, a handsome 1882 structure on Las Vegas’ central square — a favorite of Teddy Roosevelt’s — said to be haunted by the hindquarters-slapping ghost of hard-gambling owner Byron T. Mills.

Overlooking the Plaza are multi-dealer Plaza Antiques and Tapetes de Lana, a weaving co-op dedicated to preserving a centuries-old New Mexican craft. A Tapetes scatter rug or scarf, perhaps in the striped Rio Grande style, is as potent a New Mexican souvenir as a chile ristra wreath, but much easier to fly home with.

Re eats, it may be easier to stop at the Plaza Hotel or El Fidel, but my choice is a dive called Kocina de Raphael (610 Legion Drive). Ask for directions, and be hungry — and bring a swimsuit and a social mood to the roadside hot springs about three miles north of town on Hot Springs Boulevard. You’re there when you see turreted Montezuma Castle, an 1882 Harvey House railroad hotel now part of United World College USA. 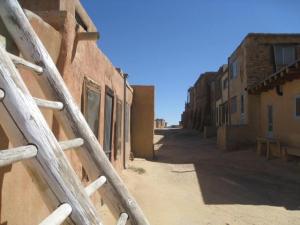 To get to the oft-overlooked but archetypally Western town of Gallup, zip an hour south on I-25 from Santa Fe to Albuquerque, then another two west on I-40. Hugging a neon-spangled strip of old Route 66, Gallup’s the commercial capital of the 225,000-strong, artisan-rich Navajo Nation, making it the mother lode of authentic Indian jewelry, pottery, rugs, fetishes, and kachina dolls, all sold for half to a quarter of Santa Fe prices.

You’ll find these treasures in Gallup’s trading posts, which serve the Navajos as galleries, banks, pawn shops, and general stores. Time-honored examples include Ellis Tanner (ask to be escorted to the “wholesale room,” stuffed with unclaimed “dead pawn” turquoise-and-silver bracelets and earrings for under $75), and Richardson’s Pawn, a Route 66 landmark known for heirloom-worthy Navajo rugs, hand-loomed into captivating patterns like cross-laden “chief’s blankets” and geometric “eyedazzlers.”

Gallup’s choicest chow is found at Fratelli’s Pizza, where the pies are hand-thrown, and at Zen Steak & Sushi. Before heading back to Santa Fe, a pit stop at the exhilaratingly unrenovated El Rancho Hotel is a must (case the mezzanine for black-and-white glossies autographed by movie stars from Ronald Reagan to Jane Fonda, who holed up here while filming Westerns).

Acoma Pueblo, recently rebranded as “Sky City,” is a riveting detour en route to Gallup. This thousand-year-old tribal village dizzyingly set atop a towering stone mesa is billed as America’s oldest continually inhabited town; stop for a tour and the Haak’u Visitors Center, with a documentary, Indian “fry bread,” and a shop spotlighting Acoma’s celebrated pottery (sure to mesmerize you with its thunderbolt-like patterns).

Comment by Adriana Gallegos on April 9, 2011 at 7:37pm
Great article!! I'm from Albuquerque, NM and I'm glad that you were able to describe other towns other than just Santa Fe and Albuquerque.

Comment by Brad Malone on April 8, 2011 at 4:18pm
Because Taos is a year-round resort destination, regarding Sam's question, there are over 40 B&B's in Taos and about 15 motels.  Only two facilities meet the definition of a hotel.  The local B&B association website is always a great place to start with offerings in just about every price range that include breakfast.  Taos Bed & Breakfast Inns website.

What a great article.  Thanks!  Just wanted to clarify that Mabel Dogdge Lujan House is a B&B of sorts where you can call ahead for a little tour, but the museum referenced is actually the Millicent Rogers where the fashion maven's collections of jewelry and pottery are considered among the best collections of Southwestern Art in the world.

Also, Michael's Kitchen, a great Taos institution has long had the unusual closing time of 3 PM each day, so no late afternoon stops there.  The most spectacular sunsets from dining venues are at the Stakeout Restaurant about 9 miles south of town off SH 68 and occasionally from El Meze restaurant just north of town on the main US 64.

New Mexico's unusual liquor laws mean that only a few places actually serve margaritas containing tequila -- the rest serve an agave wine margarita.  Be sure to ask before ordering.

We always tell our guests to take the so-called "Low Road" from Espanola (SH 68) up to Taos since the spectacular views of the Rio Grande Gorge offered heading north are often missed if you're going south.  Additionally, take the High Road south back to Santa Fe for the same reason except the views are of the Truchas Range of the Sangro de Christo Mountains -- the southern Rockies.

Comment by Sam Scribe on November 23, 2010 at 6:22pm
These three thumbnails are on the money. Karen, do you have any favorite, mid-priced hotels in any of these towns, or do you just go for the best price?