AAFT Can Be Helpful to Senegal Broadcasting Channels 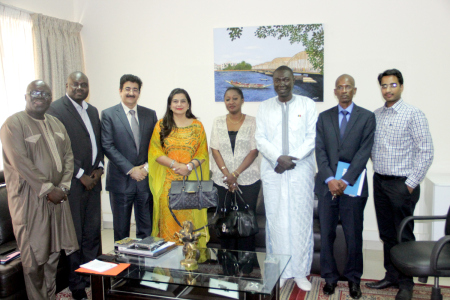 “A refreshing short term course for the existing employees of the broadcasting companies of Senegal will bring better color to the programming on television” said Sandeep Marwah the President of Asian Education Group, India during his discussion with the Ministry of Communication during his state visit to Dakar.
A special refreshing courses can be planned by AAFT- Asian Academy of Film And Television a world renowned film and television school of India which has created five world records in media training and has trained more than 12000 media persons from 94 countries of the world.
The Indian delegation was received by Mamadou DRAME the Director of the Cabinet, Ministry of Communication, Government of Senegal. Hugues DIAZ Director of Cinematography, Ministry of Culture, Mme Marieme Thiam NDOUR Telecommunication Engineer, filmmaker Modibo Diawara and Abhinav Bajpai were also present in the meeting.