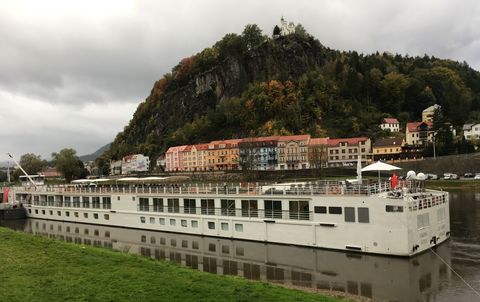 Booking a stateroom for an Elbe River cruise excursion during a colorful October in Germany made my seasonal travels a complete success.  The Elbe River extends through a part of Germany that I had yet to explore with Viking… Between Los Angeles and Santa Barbara runs the US 101, alternating between rolling hills and stunning sea views. Family activities abound at a midpoint in Ventura County West, making for an excellent three day vacation close to the heart of Los Angeles. This area includes Camarillo, Oxnard, and Ventura.

Choose day trips between wine tasting, old airplanes, classic cars, or whale watching, just to name a few, as well as the tourist-friendly downtown shops and…

Like Barrie's character Peter Pan, I won't grow up. Presented with the natal cleft of the man ahead of me, I just had to snap a picture of it with my wine glasses. From the get-go my goal was to write this article, more as a joke than a tome on wine tasting. Then it became real as I got it into my nose. I was in a group of wine aficionados, all calling out their…

Looking to the South from Remarkable Rocks, there was nothing between me and the southern ice cap but cold water. I had gone about as far as I could go… finally. From this point near the bottom of the world, I would go North, across the continent and transition from penguins to crocodiles. I was soon to board The Ghan, but fortunately it was no…

Have you considered what the old guy or lady down the street may have done in life beyond work at the supermarket? The people largely responsible for our freedoms are passing away. This June is the 70th anniversary of the World War II invasion of occupied France, known as D-Day.…

This is a true story of a death at sea. It is a story of weekend sailors and the US Coast Guard.

My father, Richard, was an experienced sailor. He studied sailing and boats, practiced maneuvers, and for years he sailed his sailboat around southern California. His long distance trips had included being crew on a Tahiti bound sailboat. He was better than most for seamanship skills.

The famed El Cid battled the Moorish invaders in the area around Valencia during the Middle Ages of Spain.  Unless El Cid held dinner parties with the remaining Moors, it is unlikely that he enjoyed Valencian seafood paella because its origins in Spain developed later from the Moors influences on cooking with rice.

Lynchburg, Virginia Has It All

My playmate’s father walked with a stiff leg from the D-Day invasion of World War II. At the age of seven, we all knew the basics of what this meant – we also knew older kids still without fathers. We boys all talked about what our fathers had done in the recent war. Knowing these men puts faces on the deeds they did as exhibited by the National…

Powerboat Cruising in the Salish Sea of the Pacific Northwest

I went to one of the top 1,000 places to see before dying. As I keep coming back, there are probably still 999 to go. Seeing the San Juan Islands of Washington automatically includes memorable activities such as sighting eagles, fishing, crabbing, beach walking, nature parks, sailing, kayaking… you get the idea. What I like to do in the San Juan Islands is take a boat out of Bellingham. Once underway, I skipper myself into a nirvana harbor. I will list here several such harbors that induce…

A Trip to Gettysburg, Pennsylvania I am in Gettysburg, Pennsylvania, visiting a deciding battleground in the U.S. Civil War. In 2013 comes the Sesquicentennial of the 1863 battle and its outcome largely decided if our "perpetual union" would… Continue

Mancation - On Becoming Unforgettable to Her

OK, this will border on being a relationship advice column. Those who know me will say that I am the last person to ask for advice. I respond that every dog has its day.

I have discovered the perfect gift for your special person. If this can't get you out of the doghouse, then it is over.

Near Buellton, at Highway 246 off the famous California Highway 101, is a road going into the beautiful La Purisima Hills. At the top lives a persevering woman that established from…

How can I explain this title to those under 55? Charlie Don’t Surf is a great line from the film Apocalypse Now about the Viet Nam War; Colonel Kilgore answering a soldier as to why they need to take a point of land with a great surf break and risk…

Woodinville is getting big into wine tasting at traditional wineries and tasting rooms.…