Coming to Danang, which has a large number of attractions including Son Tra Peninsula, Ba Na Mountain, Cham Museum and nearby Hoi An ancient town, you should not miss My Khe Beach, located about six kilometers east of Danang and 24 kilometers north of Hoi An. The beach is a nine-kilometer stretch of smooth sand and is famous for its fresh atmosphere and blue water.…

Located about 8 km from the centre of the capital city of Hanoi, Trieu Khuc Village launches its spring festival on the 9 th day of the first lunar month of each year.

The focal points of Trieu…

Ban Gioc Waterfall – The largest one in Vietnam!

Ban Gioc Waterfall is now an attractive beauty spot for national and international visitors. Travelling some 272 km from Hanoi, you will reach the splendid fall...

Ban Gioc Waterfall on the Quy Xuan River is located in Cao Bang Province, nears the Sino-Vietnamese border. The waterfall falls thirty meters. It is separated into three falls by rocks and trees, and the thundering effect of the water hitting the cliffs can be heard kilometers…

Though Sapa has long been familiar with tourists, Ta Phin Village is still a new name to almost everybody. Located about 17km in the west of Sapa, Ta Phin is a village of Red Dao’s people possessing a rich culture that has not been damaged by the modern life.

From Sapa, it will take about 30 minutes to reach Taphin by motorbike. The road can make it difficult for cars to move, so the best solution is to hire a “xe om”, or motorbike taxi, and the…

From a distance, Lung Cu is a spectacular sight in Ha Giang and referred to as “A high forehead of the motherland.” Tourists in Vietnam travel getting the chance to visit this Northern mountainous province don’t miss an attractive - tourist destination - Lung Cu where you can take in the imposing beauty of landscapes and the diverse ethnic groups living. Especially, you can see the Lung Cu flagpole, inspiring a deep sense of pride in Vietnamese.…

The palace preserves and honors Vietnamese spiritual and special art values. Non-tangible and tangible values make the palace to become a lively museum. This place has become a tourism product to serve the 1000th year of Thăng Long – Hà Nội and the National Tourism Year 2010 in Hà Nội.…

When touring Cham Islet, or Cu Lao Cham in the ancient city of Hoi An in Quang Nam Province you are bewitched by splendid landscapes with wonderful sandy beaches, forested hills and the glorious clear, blue sea. 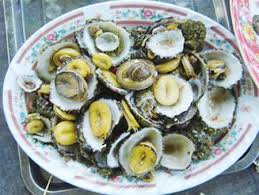 A view of Cham islet in Hoi An ancient town, Quang Nam…

Pa Khoang Lake next to the Command Base of Đien Bien Phu Battle.…

Kim Lien village or often called Sen village is located in the Kim Lien commune, Nam dan district, Nghe An province.  There is a vestige area of Kim Lien to tribute President Ho Chi Minh. This is the father land of him and the mother land is in Hoang Tru village which is not far from that.

Visiting the Mekong Delta city of Can Tho in Vietnam travel, tourists have the chance to shop on floating markets or drift along canals and bicycle around orchards, and Thuan Hung paper cake craft village is a good place that should not be missed to visit.

Con Dao Island looks like a bear rising from the sea to south east of Vietnam. Originally a prison for patriots and revolutionists during the French and American resistance, Con Dao Island sheltered brave revolutionary spirits of the Vietnamese people. More than 22,000 prisoners who dedicated their lives to national independence were incarcerated on the isolated island of Con Dao.…

Paradise of smog and cloud in Moc Chau Plateau

Moc Chau is one of the most pristine beautiful plateaus in the North mountainous region that brings the amazing attraction for all classes of people even for hard-to-pleasure tourists. Maybe thank to the favor of nature when locating Moc Chau more than 1,050 meters above the sea level with the temperate climate, this plateau has the…

Forty beauties of the Miss Vietnam 2012 pageant dazzlingly posed for photographs in ao dai (traditional long dress) at a resort in the central city of Danang on August 19.