Writers Meet by Asian Academy of Arts at Marwah Studios 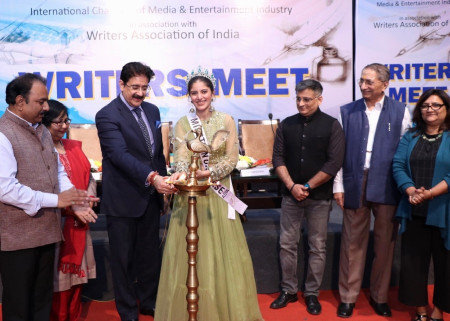 Noida: Asian Academy of Arts once again planned a powerful meet of writers at Marwah Studios to recognize the efforts of young and old writers of the country in association with International Chamber of Media And Entertainment Industry.

Many writers from Delhi NCR and different parts of the country marked their presence when large number of suggestions was brought on the table.

“We are excited that our second Writers meet has attracted many writers from al over India. We have reached to the fifth edition of our Global Literary Festival and festival has already been now the second biggest in the country after Jaipur,” said Sandeep Marwah President of Asian Academy of Arts.

Sushil Bharti Secretary to Writers Association of India induced writers to write more and also offered them a platform at Asian Academy of Arts to publish their books in time to come.