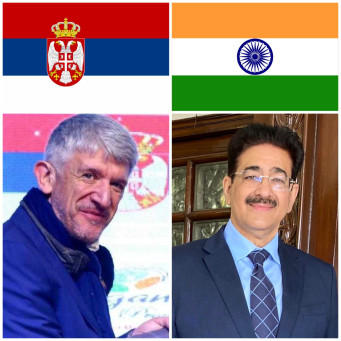 New Delhi: “I on behalf of ICMEI and complete media & entertainment industry and art & culture fraternity extend my heartiest congratulations to H.E. Mr. Siniša Pavić, Ambassador – Charge d`Affaires a.i. of Serbia to India and people of Serbia on the auspicious day of their National Day which falls on 15th February,” said Dr. Sandeep Marwah President of International Chamber of Media And Entertainment Industry.

15th February is a holiday and celebrated in Serbia to commemorate the outbreak of the First Serbian Uprising in 1804, which evolved into the Serbian Revolution against Ottoman rule. The revolution ultimately resulted in the recognition of Serbia’s National by the Ottoman Empire (formally in 1817, de jure in 1830).

On the same day in 1835, during the rule of Milos Abrenovic, the first modernSerbian constitution was adopted in Kragujevac, known as the Sretenje Constitution or Candlemas Constitution.

Dr. Sandeep Marwah has wonderful relations with the two of the popular institutions of Serbia namely International Roma Cultural University Belgrade and The Centre of Roma Studies and he has been honoured Doctorate from both the institutions informed Marwah.