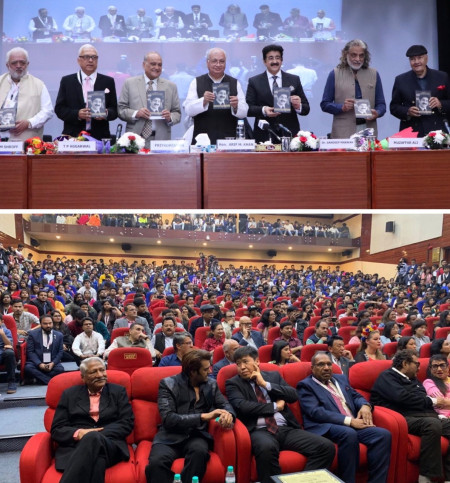 Noida: A grand function was organized to release the first book on Sandeep Marwah under the title ‘A Walk In The Corridor of Eternity’ written by a young writer Shreeya Katyal on the third day of 12th Global Film Festival Noida 2019 at Noida Film City.

“I extend my heartiest congratulations to Sandeep Marwah on the release of his first biography. He deserves this kind of grand function. He is a source of motivation for many. I wish him all the success in his forthcoming ventures,” said Arif Mohammad Khan Governor of Kerala while releasing the book.

“Though I am meeting him for the first time but I have heard enough about him. His contribution to the industry is par excellence,” said Priyadarshan a renowned film director from South.

“Not many people from film, television and media fraternity are that lucky to have a biography written on them. Sandeep is actually been always different from the crowd,” said Rahul Rawail film director and advisor to Ministry of Information and Broadcasting, Government of India.

“Being written in a book, means part of the history. It is hard to believe that single man can do so much to promote the industry,” added Muzaffar Ali a well-known producer, director writer, poet and fashion designer.

“Sandeep I know him for more than 20 years, he is a one person army. He has solution for every problem of the industry” said T.P. Agarwal Former President of FFI- Film Federation of India and President of IMPPA- Indian Motion Picture Producers Association.

“Never ever seen such a huge event for the release of a book and so many dignities at the same time. It is Sandeep Marwah’s love and affection that we all are here at the same time,” added B.N.Tewari president of FWICE- Federation of Western India Cine Employees.

“He has proved to the world that passion is the key to success. Sandeep has broken all records of film education,” said Prem Chopra a veteran & popular actor of Bollywood.

“I am privileged to be here on the same stage where giants of Indian film industry are appreciating Sandeep Marwah together. I wish him all the best in life and many more books on him,” said Akhliesh Mishra Director General ICCR- Indian Council of Cultural Relations, Ministry of External Affairs Government of India.

“We all extend our best wishes and blessings to Sandeep so that he can do better than what all he has already achieved. He is a real showman,” said Shyam Shroff a known film financer.

“Success comes to those who are down to earth, and Sandeep Marwah is an another case study in the same series, we all congratulate him for his book,” expressed Vikram Ghokhale well known Marathi and Hindi cinema artist.

“I am so thankful to each and every one, who is present here, for their wishes and blessings,” Sandeep Marwah thanked emotionally in heavy voice

“This book is treat for every person who wishes to make a difference not only in his own life but in the lives of million others, who dares to dream and want to get the confidence and courage to achieve all the great heights,” concluded Shreeya Katyal writer of the book.