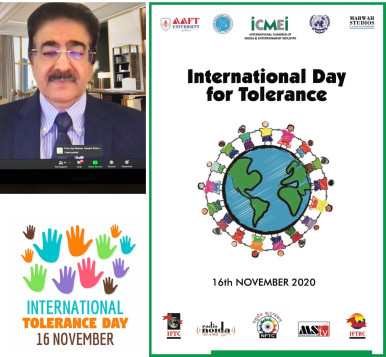 Noida: For its fiftieth anniversary on 16 November 1995, UNESCO’s Member States adopted a Declaration of Principles on Tolerance. Among other things, the Declaration affirms that tolerance is respect and appreciation of the rich variety of our world’s cultures, our forms of expression and ways of being human. Tolerance recognises the universal human rights and fundamental freedoms of others. People are naturally diverse; only tolerance can ensure the survival of mixed communities in every region of the globe.

“The Declaration qualifies tolerance not only as a moral duty, but also as a political and legal requirement for individuals, groups and States. It emphasizes that States should draft new legislation when necessary to ensure equality of treatment and of opportunity for all groups and individuals in society,” said Sandeep Marwah President of AAFT University in a close function celebrating International Day of Tolerance.

“Education for tolerance should aim at countering influences that lead to fear and exclusion of others and should help young people develop capacities for independent judgement, critical thinking and ethical reasoning. The diversity of our world’s many religions, languages, cultures and ethnicities is not a pretext for conflict, but is a treasure that enriches us all,” added Dr. Marwah.

The event was planned by IFUNA- Indian Federation of United Nations Organizations in association with WPDRF-World Peace Development And Research Foundation & ICMEI- Chamber of Media And Entertainment Industry.