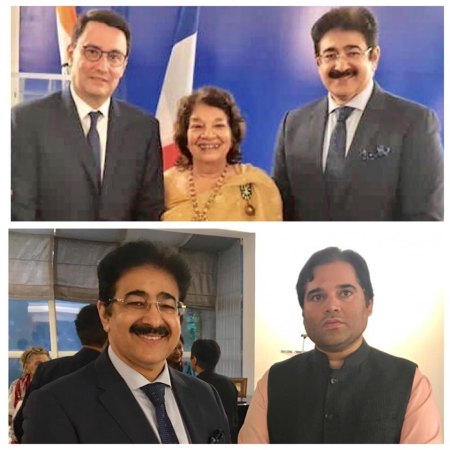 New Delhi: Film scholar, editor and painter, Ms Aruna Vasudev recipient of Life Time Achievement Award of Global Film Festival and also on the board of Asian Academy of Film And Television, received the prestigious French honour of ‘Officier de l’Ordre des Arts et des Lettres’ (Officer of the Order of Arts and Letters) for her outstanding contribution to cinema and the arts.

The Ambassador of France to India, H.E. Mr Alexandre Ziegler, conferred the insignia of the distinction on Ms Aruna Vasudev in a special investiture ceremony on Tuesday, 13th August 2019, at the Residence of France.

We are proud of Aruna Vasudev for her huge contribution to Indo French relations and supporting every cause of cinema,” said Dr. Sandeep Marwah President of Marwah Studios present on the occasion.

Lauding her numerous attainments, Ambassador Ziegler said: “Aruna Vasudev’s lifetime of achievements as film critic, scholar, jury, filmmaker, administrator and painter is near impossible to sum up. She is also the vice-president of the Alliance Française de Delhi. She has created so many events, forged so many partnerships, established so many platforms to promote Asian films across the world that she has carved a path that continues to guide the young generation today.” Varun Gandhi Member Parliament was the special invitee.